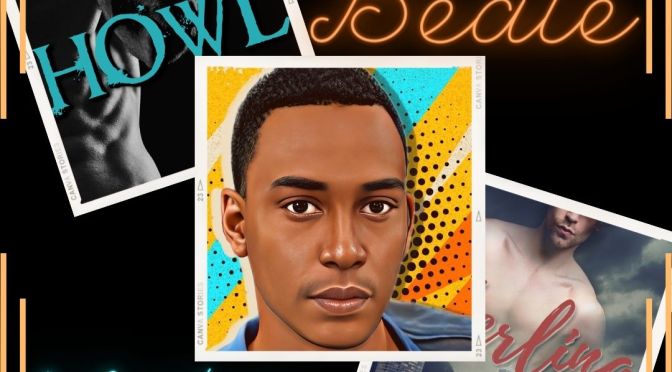 I know that I’m supposed to say that I wanted to provide representation that I didn’t have growing up. Or that I wanted young kids who are growing up like I did to see themselves in my stories. I really like telling stories, creating characters, and getting lost in make believe worlds. Writing makes that possible.

2. Tell us about the first book you’ll be releasing.

The first book I’ll be publishing (with The Lion Fish Press) is a book called HOWL. It’s the first book in The Wolves of Woodman series. It’s a paranormal romance series that is hella gay, has tons of werewolves, pack politics, and a touch of humor. Tons of relationship angst and drama. It’s going to be a fun and addictive series for people who love to read M/M paranormal romance.

I won’t lie. To have Stephen King or J.K. Rowling money. Telling my stories to readers who enjoy them is cool until that happens, though.

4. What are your future writer goals? Other than becoming rich?

I have a standalone M/M New Adult book signed with TLFP and another series called The Men of Silas Bay signed with them as well. The plan is to work on the two series and release the standalone.

5. What makes your stories stand out from others?

A complete lack of interest in haters. My stories are meant to be fun, romantic, spicy, and not taken too seriously. I really miss books that are written to entertain readers and not held under a microscope for some deeper meaning or dissected and held up to certain societal standards. If readers want to have a good time, fall in love with dynamic characters, and escape from life for a few hours, my stories are for them.

P.J. Beale is a first-time M/M/ romance author signed with The Lion Fish Press. His first book HOWL (The Wolves of Woodman #1) will be arriving in 2023. He can be found on The Lion Fish Press website, on Twitter, and pjbealeauthor@gmail.com.