Week 3 of NaNoWriMo is behind me and it was another exciting week full of surprises.

Excitement and surprise mostly came from the fact that I hit my 50k word goal on the 19th, eleven days ahead of schedule. I had kind of predicted that I might finish early–around the 20th–due to the average word count I was managing. However, even I felt that was a little too optimistic.

And here we are, right?

On November 19th, in the wee hours of the morning, my NaNoWriMo came to an end when I hit my goal.

When I wrote the last word of the chapter I was on, around 3am on the morning of the 19th, I was at 50,102 words. Updating my word count on the NaNo site made that sink in and I was left with a question.

Should I keep working on POSSIBLY, TEXAS through the month of November and see how much I can get done? After 19 days and 50k+ words, I’m roughly a third of the way through the first draft. Or, as my outline has it laid out, I have finished Act I of the book.

Could I possibly complete ACT II before November is over? That would only leave ACT III to be finished at a later time.

Or should I set it aside and move on to other projects that need my attention?

It’s a very tough decision to make. I’ve been having a lot of fun writing POSSIBLY, TEXAS. My imagination and passion are ignited and I just want to write until I can’t write anymore. However, I want to be careful with this book because it feels very special to me.

Furthermore, one of the last scenes I wrote for ACT I was deeply unsettling to me. I’ve written some very personal things. I’ve written about disturbing subjects. But this scene in particular was one that moved me in ways I never would have expected…until I wrote it. I’m not ashamed to admit this–because it’s not about me thinking my writing is amazing–but when I finished the scene, tears were rolling down my cheeks and my vision was too blurry to see the computer sceen. It was very unsettling to me and for about twenty minutes, I wondered if I could finish writing the book at all.

So, I considered setting the book aside and moving on to something else for now. Give my brain a rest.

That didn’t feel right either.

So…I’ve decided to just write more on the manuscript when I have time for the rest of the month. Then I’ll make a decision about the rest of the book. I’ll update NaNoWriMo’s site on November 30th with my final word count. That’s the best decision I can make for now.

What’s 10 more days of writing before I decide the fate of this manuscript, right?

In the meantime, how about a chapter title listing for ACT I?

The Mystery of Shirlene

My Friend, The Moon

The Boy from the Barn

A Hole in the Sky

God Is a Woman

Rue for You and Rue for Me

I’ll have more news next Tuesday, I’m sure.

And since we might not “speak” again until after – Happy Thanksgiving to all of my American readers. I hope your day is filled with good food, love, laughter–and responsible celebrating. Wear your masks, wash your hands, and try to celebrate with only the people in your household. Zoom and Skype are wonderful inventions. 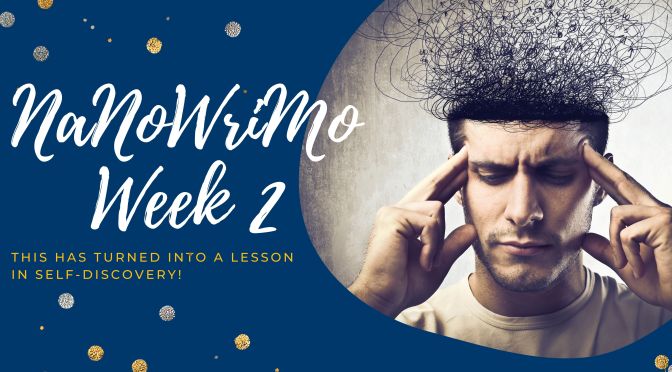 Week two of NaNoWriMo was just as exciting and fast-paced as week one! Suddenly, I have 36k+ words down in my manuscript and my goal of 50k is just around the corner.

However, there are a few problems I foresee looming in the future for POSSIBLY, TEXAS.

At 36k, nearly to my goal of 50k, I’m not even a third of the way through the first draft of the manuscript. To give context, the general consensus is that YA/NA novels should fall between 50-85k words.

When I started outlining for my manuscript, I thought this was going to be a YA novel on par with my other offerings, such as A SURPLUS OF LIGHT or GINJUH or THE GUY GETS TEDDY. All of those are in the reasonable neighborhood of 50k words.

However, at the end of the outlining process, and moving into NaNo, I realized that POSSIBLY, TEXAS was going to be a three act novel. Meaning, there where will be three distinct acts, beginning, middle, and end. It’s not as straightforward as many of the other novels I’ve written.

Right now, as I work on the manuscript, and I see what the word count is looking like, I’m concerned. Even with heavy editing, this book is going to be a chonkster. I know this because I’m not writing a lot of filler. I’m being concise and choosing my words carefully…yet it’s still a massive manuscript for a young adult novel.

Another problem is that I don’t want to cut anything for the sake of brevity. There are certain aspects of the story I could chop up…but I love them all so much. And this isn’t a situation where I refuse to kill my darlings–I genuinely feel that all of the elements are greater than the sum of their parts. The story just won’t be as quirky and charming if I cut things. Chopping it up will ruin the whole thing.

Furthermore, around the 25k word mark, I realized that there’s an aspect to the story I hadn’t anticipated. POSSIBLY, TEXAS is a metaphor for something…but even *I* didn’t know it until I started writing it. I’m trying to decide how much I want to lean into that…or if I just want to leave it really vague and see if readers pick up on it.

So many decisions to make and words to write still!

Regardless, there are good things, too! A beta-reader has read the first 25kish words and has said they really enjoyed it. So, that’s good news.

They told me: “It’s weird how it’s soooooooo you! Like, I can see you through your writing in this one. I don’t know how to explain it.”

So, maybe I’m really solidifying my voice as a writer. I’m leaning into that shit, maybe?

Questions, concerns…I have to say this is a book I’m still thrilled to be working on each day. I really think this is going to be a special one for the readers. I know it’s special for me.

I guess that’s all I have to share now, so I’ll leave you with this graphic I shared on Twitter the other day:

Today is the 10th, but I had to wait until today to post a blog about an entire week of NaNoWriMo. But here we are…

For those of you who are unfamiliar–especially those who do not follow me on Twitter–NaNoWriMo is an acronym for National Novel Writing Month. Every November, writers commit to write a novel–or, at least, a specific number of words, generally 50,000. I did NaNoWriMo in 2018, and that resulted in THE GRAVITY OF NOTHING.

I think things turned out well. But I’m biased.

While I didn’t enjoy writing the book so much–it deals with very heavy themes surrounding sexual assault, mental health issues, PTSD, and drug use–I loved the NaNo experience. Writing with a horde of other writers to cheer on and be cheered on by was…amazing!

I skipped 2019 because of…life…I guess. I was also deeply involved with other projects at the time that I refused to set aside for NaNo 2019. Additionally, I was freshly signed with The Lion Fish Press and we had a lot of work to do at the end of the year. BETWEEN ENZO & THE UNIVERSE and JACOB MICHAELS IS DEAD were coming out at the beginning of 2020.

That should bring us all up to speed. I started NaNoWriMo on the first, and committed to writing 50k words on a new novel. As of this writing, I am just over 20k words. Way ahead of schedule, thank you very much. But I also know this book will be more much more than 50k, so I’ll be working on this for a long time to come. Especially since I’ll have to set it aside at the end of November to focus on other projects.

Regardless, I thought I might share a little about my project with all of you. Here’s the initial book cover and synopsis that I posted on Twitter a while back:

As you can see, the working title is POSSIBLY, TEXAS. Unless my imprint gives me too much trouble, I plan to keep that title. And I actually like the above design for the final book cover.

I can’t really share much more than this since it’s a work in progress–and I like to keep things kind of secretive anyway.

However, I did make a map (a new skill I’m learning) of the downtown area of Possibly, Texas (which is a fictional town I’ve created for the book). Here’s that:

I won’t be fielding any questions about the map at this time. Unless you want to know why I’m so bad at it. The answer is – because I’m learning! HA!

So, that’s where I am on NaNo. In 2018, I was pretty stressed with NaNo. Worrying about winning, whether or not I could actually write a whole novel in a month–those kinds of things. This year, it’s actually been a lot of fun so far.

I’m passionate about all of my projects–I wouldn’t write them otherwise–but this one feels…special. I don’t feel the way I normally do when I write. I feel like the muse is speaking through me.

It’s almost like when I wrote A SURPLUS OF LIGHT. I just know these characters so freaking well. It’s like I’ve known them forever.

I know that’s a weird thing to say about a book that is YA, but these characters and the town are really inspiring for me as a writer. This book is really making my creativity flow like crazy again.

In the end–whenever this chonkster is published–I hope it’s something that touches the imagination, hearts, and souls of the readers. I feel it will be a book that captures readers’ attention right away and won’t let go until the end. And there are so many characters to love.

I know what you’re all thinking–freaking writer licking his own butthole about his own project.

I understand. I really do. It feels very narcissistic of me.

But I promised myself awhile back that if I feel something is good about my work, I will allow myself to say it. And I won’t feel embarrassed or ashamed. We should all practice giving ourselves a pat on the back more.

Of course, it will be up to the readers to decide if it’s really good. Sometime in the future.

In the meantime, I plan to blog about all 4 weeks of NaNo. Now that you know about the project, I’ll share my experiences of writing so much in such a short period of time in the coming weeks.

Hopefully, you’re all ready for another journey with me.